New York, NY – The Blitz Riddim – Various Artists packs a punch of power soca for lovers of the genre. Featuring power soca star Skinny Fabulous, soca impresario Jamesy P, and rising sensations Silvah and Teddy Rhymez, the electrifying singles are set to take many stages, playlists and fetes by storm as carnival season continues around the world. The Blitz Riddim will be available worldwide on all major digital retailers on August 13, 2013, with pre-order available now, and is distributed by Precision Digital. 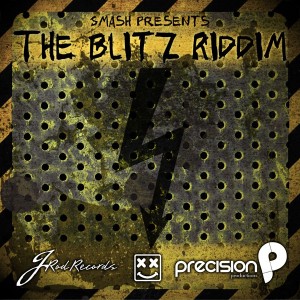 “The Blitz Riddim was inspired from electronic dance music (EDM) and power soca, to create something different and intense for soca music fans,” reveals Smash.
On the tailwind of recent success with his previous release, The Star Dance Riddim from Precision Digital earlier this year, Smash stays on course with experimenting with soca music and all its sub-genres with The Blitz Riddim. This take on power soca builds his repertoire and catalog, which now includes pop and electronic soca fusions, and now power soca, thereby invoking into the soca genre an inherent taste of the world, as only Smash can.

The Blitz Riddim will be available worldwide from all major digital retailers on August 13, 2013, with pre-order available now, from Precision Digital.