New York, NY – On Wednesday, August 7, the great Nigerian Chief Commander Ebenezer Obey, returns to New York City for a grand performance at SOB’s alongside a full live band and King Sunny Ade’s dancers! Born in Idogo, the Western region of Nigeria, the Jùjú pioneer’s musical talent was recognized early on when he was asked to lead the band at his Methodist Primary School. After moving to Lagos in the mid-1950s he played in various other bands before starting his own, the International Brothers, in 1964. They soon had a hit juju single “Ewa Wowun Ojumi Ri.” Though juju had been around for a while it was still highly influenced by Ghanaian highlife. Obey modernized the sound by adding the funkiness of Yoruba drumming, more Western-style guitars and drum-kits, and added multiple talking drums, where only one had been used before. That was the beginning of modern juju. As he says:

“It’s like cooking a soup. If you put in many different ingredients, it tastes richer and better” 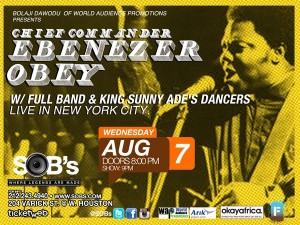