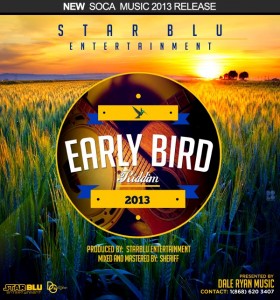 As the saying goes “the early bird catches the first worm” with a flock like Destra Garcia, Alison Hinds and Super Jigga TC these early birds intend on catching the attention of the soca industry at home, up the islands and beyond with a supporting cast of writers (Dale Ryan and Patrice Millien) and producer (Starblu Entertainment) who contributed to giving rise to the ever popular Project 5 Riddim. This fleet promises to whistle beautiful melodies in Crop Over all the way to Trinidad Carnival 2014.