The Performers For The 32nd International Reggae And World Music Awards (IRAWMA) Have Been Announced!

Over 15 Top Reggae & World Music Acts to Perform at IRAWMA

On Wednesday, April 10th voting to select the winners in the 32nd International Reggae and World Music Awards (IRAWMA) ended. At the same time, some of the performers for the glamorous awards presentation and show, set for May 4, were announced at the event’s Press launch hosted by VP Records at Finger Lickin’ Restaurant and Bakery in Pembroke Pines, Florida.

This Star-Studded lineup is not one to be missed.
Featuring…….

Additional entertainers will be announced once they are confirmed. The awards show will be hosted by Freddie McGregor and Etana.

The exciting evening begins with the celebrity red carpet arrival and reception starting at 6:00pm, followed by an electrifying awards ceremony at 8:00pm.

This year’s IRAWMA is dedicated to Health Awareness and some 200 reggae and world music industry individuals, groups and others were nominated in 40 categories for their accomplishments and contribution.
Lifetime/Hall of Famer awards will be presented to Derrick “Duckie” Simpson – Black Uhuru, Denver “JAMUSA” Silvera, The Honorable Edward Seaga, Lloyd Campbell of Joe Frasier Records and Inner Circle.

Advance admission tickets are available online at www.coralspringscenterforthearts.com, and www.irawma.com. Tickets can also be purchased at VP Records and Brawta Caribbean Cuisine in Miramar, and Reggae and Things in Coral Springs, Florida. 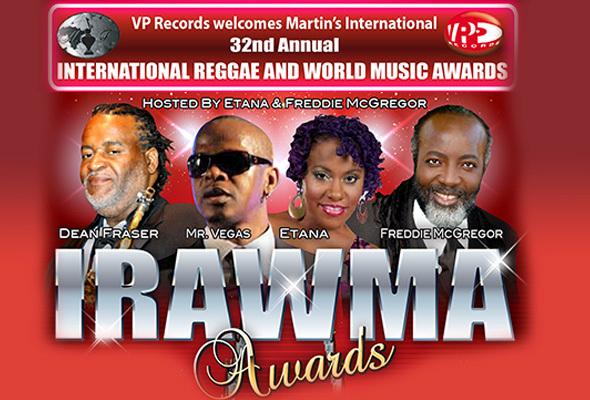