International Young, Hip and Soulful reggae crooner Christopher Martin nabs one of the biggest awards of the night at this years Linkage Awards, Singer of the Year.

Christopher Martin had a breakthrough year in 2012, topping charts and making a musical impact worldwide. As one of the only “singers” to headline many of the urban and dance-hall main stage in 2012, it was icing on the cake when he received the Linkage Award Singer of the Year.

“As an artist, I just love music, love the work I do and enjoy any opportunity I get to sing for the people. So when an organization can take the time out to acknowledge me for what I love to do, in a category with my peers, its a great honor and joy” says Christopher Martin.

“Its a wonderful and proud feeling to see the work that we put in has been recognized in such a way that they see fit to award him for it” say manager Lydon “Kingy” Lettman.

The work continues as Christopher Martin, gears up for a three week Europe tour, scheduled to kick off on March 28th in Amsterdam. From the beginning of the year Christopher Martin has been in enormous demand and this European tour is one, which his fans has been requesting his return.

Upon his return from Europe he then heads to Canada. By the look of things 2012 was a great year, but 2013 will be greater. 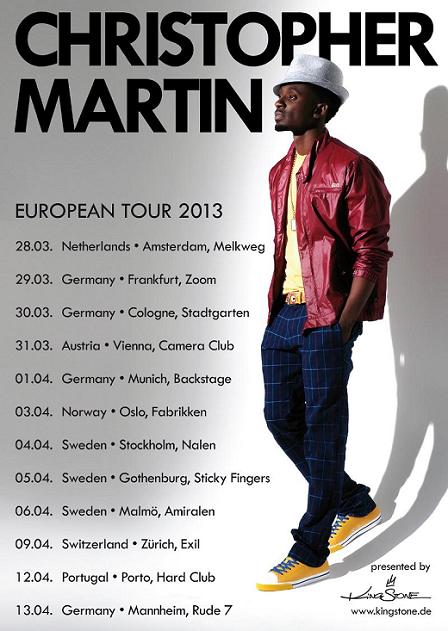