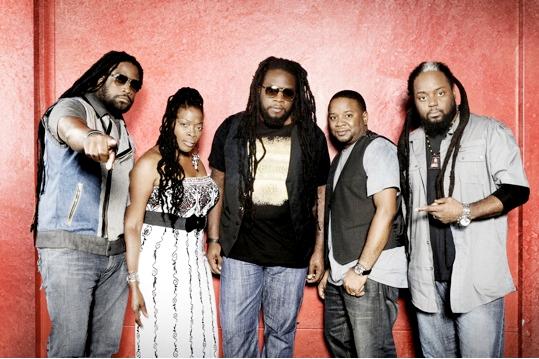 • After respective solo careers and music ventures of their own over the last five years, Morgan Heritage returns this summer with their groundbreaking roots reggae album Here Come The Kings (JUNE 4, 2013, VP). Filled with brilliant instrumentation and empowering lyrics, Here Come The Kings brings roots and culture music back to the forefront, while staying true to their authentic Rockaz style (coined by the Morgans as reggae with an edge).

• The band is compromised of five out thirty children from legendary Jamaican vocalist Denroy Morgan, who is best known for his 1982 Billboard Hot 100 r&b flavored hit “I’ll Do Anything For You” (which is still in rotation on classic soul stations).

• In the 80s, their father Denroy moved the children from their Brooklyn birthplace to Springfield, Massachusetts, so they could pursue their education without the distractions of urban life. As devout Rastafarians, the family prayed together several times daily, observed certain dietary restrictions and commuted to Brooklyn each weekend to work on their musical craft.

• Their electrifying stage presence at Jamaica’s Sunsplash festival in 1992 immediately caught the attention of a MCA Records representative, who signed them on the spot and released their debut album Miracle in 1994. This signing triggered one of the most impressive streaks in modern-day reggae and is a true testament why the group is still considered one of best live reggae bands of all time.

• The group made their national TV debut performance with their dad on the CBS Sunday Morning news program for a a special Father’s Day segment.

• In 1995, Denroy relocated his family to Jamaica, where Morgan Heritage met and teamed up with Lloyd “King Jammy’s” James (the producer of reggae’s first entirely computerized rhythm track “Sleng Teng”) and Jammy’s former assistant and celebrated producer Bobby “Digital” Dixon. They went on to record multiple albums with VP Records and created a hit filled repertoire to last a lifetime.

• The band was heavily exposed to punk rock as one of the featured acts on the Vans Warped Tour in 2002 and 2003, which led to a collaboration with Good Charlotte’s guitarist Benji Madden on “Jump Around” in 2003.

• In the past year the band has performed at major stages show – including Brooklyn’s new Barclays Center stadium, London’s famed O2 arena during the 2012 Olympic Games and the Garance Reggae Festival in the south of France to over 50,000 fans.

• Collaborations with ingenious young blood producers like Lamar Brown (Notice Productions), Shane C. Brown (Juke Boxx Productions) and multiple Grammy nominee, Jason “J-Vibe” Farmer, lead the band to explore new sounds on upcoming 2013 album Here Come The Kings that successfully fuse roots, r&b, and a hint of dancehall, evident on cuts like “Perfect Love Song” and “The Girl Is Mine,” originally recorded by Michael Jackson and Paul McCartney. The latter songs also featured on their most recent EP The Return.