"Saucy Reminds All, The Battle Is for the Fittest- Ready for Soca Monarch Semis"

For years Denise Belfon has mesmerized audiences worldwide with her stage show. Her music, strong vocal ability and sensual moves have propelled her to the heights of success- making her one of the most sought after Trinidad and Tobago entertainers across the Caribbean and the United States. In 2013, DeniseBelfon, fondly called Saucy Wow, is promising fans that she will deliver just what is needed at one of the most prestigious competitions in the Caribbean- the International Groovy Soca Monarch.

Over the years, the name Denise Belfon has become synonymous with a feel good energy and riveting feting experience. Versatile, unique and certainly a master at her craft, the woman who recently added the title of entrepreneur to her resume when she announced that she had in fact opened a catering service- this year continues to prove that she will not be outdone.

This coming Sunday, Belfon- the recipient of several accolades over the years, including the award for Best New Female artiste in 1995 by the New York based, Everybody Magazine, plus two awards from the Miami based organization- Music of Black Origin, is promising quite a show. She will perform in 5th position at the semi final staging of the International Groovy Soca Monarch competition being held at the ArimaVelodrome. Her excitement and thirst to showcase what she has coined, her ‘2013 statement’ is rife. Having stood against the likes of internationally acclaimed artistes like Lenny Kravitz and Jennifer Lopez in years gone by for the Music of Black Origin accolade- and in fact walked away victorious, Belfon is confident that she does have all that it takes to be victorious at home.

Denise Belfon says her ability should not be taken slightly. In fact, she reminds fans and detractors alike that she has performed live at large scale events in New York City’s Madison Square Garden and at the Radio City Music Hall. Belfon also placed third and second respectively in Road March competitions in Trinidad and Tobago and New York in 1995. “I’m coming to remind them all that my music has no boundary and with stage performance key, my team and I will deliver the best show yet,” she said.

Belfon has added a bit of spice to her set this year, incorporating dancers to her performance. “These young adults are being given this opportunity to display their creativity. I have the daughter of a woman who toured with me for years as a dancer, on my cast now- so this has gone from generation to generation,” she noted. “I’m building the ‘Saucy Empire’ and there’s no stopping the machine,” she said. 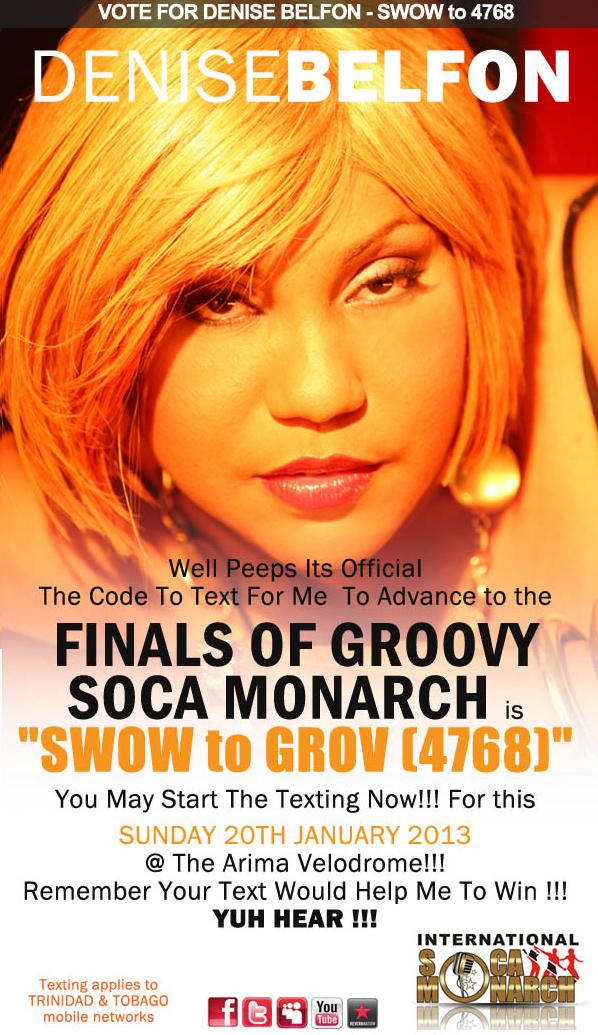