Jamaican-born, New York-based dancehall artist Pryme Time storms the dancehall world with his debut EP Fresh Out The Dirt, available today, January 15, 2013 from Kaieteur Records, with distribution by FOX FUSE. Born Daniel Lambert in Clarendon, Jamaica, Pryme Tyme returns to his roots for this musical journey, bringing his unique brand of dancehall music to the global audience with this EP.

Ambitious and electrifying, Fresh Out The Dirt boasts five sizzling tracks, fused on exclusive rhythms built solely for Pryme Tyme. The first single, a catchy, sexy ode to the ladies entitled “She Love My Taste” was released to radio on November 20, 2012. The titillating single is receiving airplay across the Caribbean, and is currently enjoying rotation in countries such as Jamaica and Guyana. The other four singles all offer up the same fuel as gritty, suggestive jams that are bound to send fans into a frenzy on the dance floors. The EP’s producers include Ed Robinson and Father Bentley, both renowned New York-based producers.

“I’m thrilled to debut my very first EP to the world,” reveals Pryme Tyme. “I’ve been on my musical mission for a long time and it is fulfilling to see everything that is happening now, with the release of the EP and my music playing on radio back home in Jamaica and around the Caribbean. I want my music to impact the whole world – that’s the reason why my name is Pryme Tyme.”

New York-based Kaieteur Records is behind Pryme Tyme, serving both as his record label and management. “I’m very excited about the EP being released,” discloses manager Michael Morian, owner of Kaieteur Records. “Pryme Tyme works very hard alongside myself, Father Bentley and producer Ed Robinson. As the new voice of dancehall, I strongly believe that my artist Pryme Tyme is among the biggest names in the dancehall industry today.” Morian also reveals that Kaieteur Records will be releasing two new singles following the EP.

Pryme Tyme’s Fresh Out The Dirt EP is now available on all digital retailers worldwide on the Kaieture Records imprint, and is distributed by FOX FUSE. Get ready for a collection of sassy dancehall bangers from this intoxicating entertainer, just in time to kick off the New Year.

ABOUT PRYME TIME
Touted as the media capital and melting pot of the world, New York City also claims home to savvy, sensational dancehall artist Pryme Tyme. Born Daniel Lambert on April 24, 1983 in Clarendon, Jamaica, Pryme Tyme relocated to NYC at age 13, and is a product of the diverse, aggressive and iconic musical culture of Brooklyn, which helps define and distinguish him in today’s music industry.

Growing up within the diversity of NYC, Pryme Tyme was greatly influenced by the different genres of music around him, but his island roots remained intact, and reggae and its sub-genre dancehall became his music of choice. However, his pursuit of a music career was put on hold because of the practicality of his mother, who, because of her struggles in raising three kids as a single parent, encouraged education and hard work. Thus, after high school and the lack of prospects in Brooklyn at the time, Pryme Tyme join the military in 2003.

During his tenure with the US Navy, Pryme Tyme visited many countries and was therefore exposed to many cultures and ethnicities. His tour of duty in Iraq during the war brought with it depression and feelings of despair for Pryme Tyme and his fellow officers. It was during this time that he enlisted his musical talents to bring joy to those around him, and his humorous and playful lyrics created a light-hearted atmosphere during the surreal events of war. Pryme Tyme’s music provided exactly the break from reality that was needed.

Following his service in the military, Pryme Tyme’s interest in a music career became more heightened in 2008, when he performed a song he wrote entitled “Gal Want Me,” for family and friends. Their cheers and motivation gave Pryme Tyme all the confidence he needed to forge ahead. He then entered talent showcases in and around NYC, where he performed songs such as “Drink And Party,” “Brooklyn Gurls” and “Money Tree,” which gained a lot of radio play across the Caribbean, especially in Jamaica and Guyana.

Pryme Tyme currently resides in Brooklyn and continues on his musical quest as a dynamic performer and provocative lyricist. He is signed to New York-based Kaieteur Records and is managed by its owner, Michael Morian. In December 2011, he released his first mixtape with renowned mixtape king, Father Bentley International. When Pryme Tyme is not busy in the recording studio, you can find him attending classes at the College of New Rochelle, where he is majoring in Liberal Arts.

Blazing into 2013 with the release of his debut EP, Fresh Out The Dirt, Pryme Tyme hits the pavement hard with a sizzling single to heat up the winter with “She Love My Taste.” The five-track EP will be available on all major digital outlets worldwide in January 2013. With his ambitious and determined foray into dancehall music, Pryme Tyme is sure to capture the attention of music fans and critics alike, across the globe. 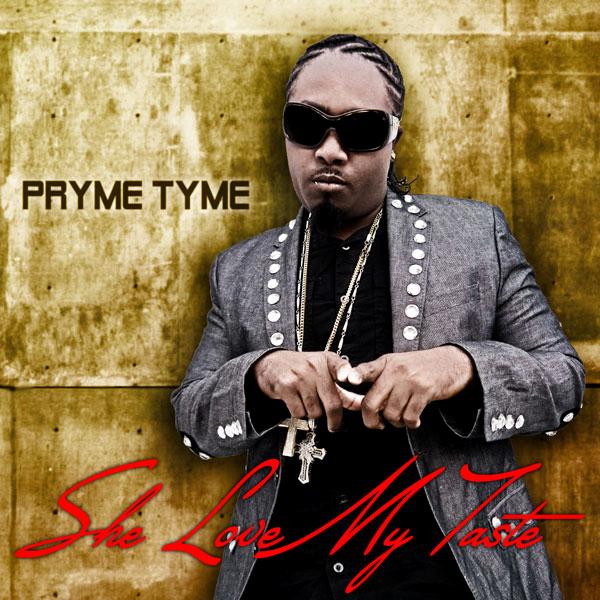