Two jazz stars this year… Indeed, the renowned saxophonist Branford Marsalis from the United States will officially open on the “Prestige Stage” at Parc Historique de la Canne à Sucre on January 19th at 6pm, and the incomparable Cameroonian bassist Richard Bona, accompanied by the Mandekan Cubano band, will close this new edition on January 26th.

13 countries… An edition with more international appeal than ever from Germany, Belgium, Brazil, Cameroon, Canada, Chile, Spain, the United States of America, France, Mexico, the Netherlands, Switzerland and of course Haiti will be on stage at the 7th PAPJAZZ.

24 bands … This year, the PAPJAZZ welcomes 12 international bands/artists, and Haiti will be proudly represented by no less than 12 Haitian bands/artists both local and from the diaspora.

9 days of jazz on 8 different stages: Decentralize the festival from Jacmel to Port-au-Prince to Petion-Ville. The PAPJAZZ will be everywhere.

A touristic appeal… La foundation Haiti Jazz, presenter of the event, is proud to offer this recurring “Rendez-vous” of music to jazz lovers from Haiti, the Caribbean and from around the world, as it showcases a cultural and touristic image of the country. 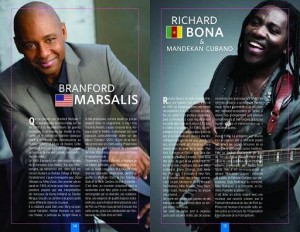