Cupid, who also serves as the Head of the Department of Culture and one of the island’s leading song writers and music instructors also nabbed four of the eight special prizes along with the EC$15,000 cash prize for the winner.

In the first round, Cupid performed Shortly After Takeoff, a heart rending reflection of the deadly plane crash which occurred on Antigua this year and took the lives of the five people on board who were heading to Montserrat. His props depicted the events of that fateful day and added a sober reminder of the frailty of life to the very upbeat competition. Performing last in the second round, the calypsonian delivered We Outsourcing, a hilarious look at the Government of Montserrat’s efforts to outsource some services.

Winning the Crowd Favourite and Best Newcomer prizes after delivering noteworthy performances from the calypso eliminations on December 8 to last night, was AJ Cassell, the son of the Late Soca King Arrow, who won the calypso monarch crown three times before switching to soca. AJ ended the finals as the first runner up for his renditions of Voice of this Generation and Pedigree.

James “Cruzer” Brown won the Cathron Products-sponsored Most Humorous Calypso and $500 for “Family Tree. Cupid won Best Social Commentary for We Outsourcing and Most Creative Calypso for Shortly After Takeoff. He added the Best Writer Award, which was sponsored by LHNet and the John Bassy Award named for the late Chief Minister John Osborne and presented by his daughter Shirley Osborne with a $500 cash prize for best political commentary.

The Most Improved Calypsonian award went to Jester ‘Ice Man’ Weekes who ended the competition as the fifth runner up.

AJ Cassell sings Voice of a Generation. The son of the late Soca King Arrow, was first runner up and won the Crowd Favourite and Best Newcomer prizes at the Montserrat Festival 50 Calypso Finals. (A Wayne Fenton Photo) 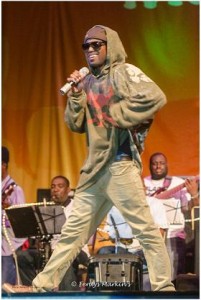 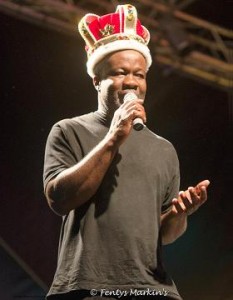